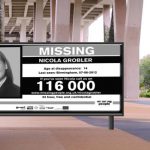 Engine Inventive used the latest experience for the lack of posters with certain people, making a high-tech 3D show on behalf of the charity Lacking Folks. The digital advertising company leveraged the latest expertise in artificial intelligence (AI) to recreate a seated image of the wanted individual, establishing an extra visceral reference to passersby, hoping to trigger the reminder and the chance for an optimistic response.

Leah Croucher, Finn Layland-Stratfield and Alexander Sloley are the main people to be examined on the system, which could animate images using machine learning (ML) to give a strangely realistic look.

It is based mainly on established behavioral science, which shows that individuals are more likely to act once they can empathize with the person being sought. The “stay” show has full flexibility of orientation and facial options so that the faces “look” straight at people.

Displayed on Ocean Outside digital screens in London, the marketing campaign contains an included QR code to make it easier to share the poster through social channels.

An estimated 70,000 young people and young people are missing each year in the UK, with many more cases being reported unreported. The initiative is the result of Ocean Outside’s annual Digital Inventive Competitors competition, which awarded £ 75,000 free of charge to Engine in its charity class.